Signed Books Direct from the Author 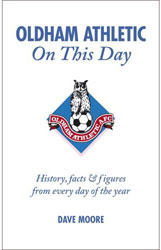 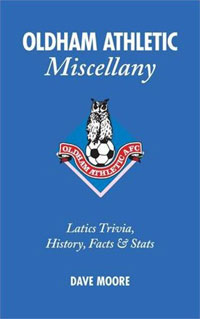 You can own a copy of these Oldham Athletic books personally signed to you by the Author, Dave Moore. You pay just the retail price of £9.99 each. Post and package to the UK from Canada is £7. Buy both books in one order and the shipping cost is still £7 for both books. Some of the books (while stocks last) are also signed by ex-players. Please send an e-mail for availability.

Oldham Athletic: On This Day

is written by respected Oldham Athletic historian Dave Moore and is published by Pitch Publishing. The book is 192 pages long and tells the story of the Latics’ long and eventful history. With individual diary entries for every day of the year, plus multiple listings on busier dates, it is full of Boundary Park heroes (and villains) and tells the tales of the matches and the characters, the promotions and relegations – indeed, all the events, however big or small, that have helped make Oldham Athletic the club it is today.

Oldham Athletic: Miscellany Remember who scored six goals for the club and had to wait until almost midnight for the manager's thanks? What was actress Dora Bryan's relationship with Athletic? Which manager won promotion for the Latics and then got immediately fired? Or the Chairman who called the Latics faithful "The lambs of Sheepfoot Lane?" How about the former Latics player who was inspired by Brian Clough or the player who was wrongly reported dead. Who always wore his socks inside-out? Which man-of-the-match was described by the manager as rubbish? Who scored the most important Oldham penalty ever? Which twins played in the same team? Do you know the 'Meat Pie Fred' song? Why did some players get fined a week's wages?

All are found in the 160 pages of 'Oldham Athletic: Miscellany', a collection of stories from the club’s 113-year history put together by lifelong fan and respected Latics historian Dave Moore. This is his second book about the club following the publication of ‘Oldham Athletic: On This Day’ and is a treasure trove of the weird and the wonderful that should put a smile on the face of Latics’ fans everywhere. Athletic legends Roger Palmer, Eric Gemmell, Jimmy Frizzell, George Hardwick, Jack Rowley, Joe Royle, Bobby Johnstone, John Sheridan, Ian Wood, Denis Irwin and Bert Lister are all in 'Oldham Athletic: Miscellany' along with anecdotes about the club’s forgotten heroes and villains. There are also reports of historic Athletic matches and all are written in an easy-to-read style that should appeal to Oldham supporters of all ages.

Would you like a unique football gift for one of your friends or even for yourself? This artist will do a caricature of your favourite player/manager in any setting you want or even with you. All you need is to send a picture/s. The prices start at around Ł20. Check the link at Cre8ors Caricatures.

The following autograph sheets/photos would make great gifts for your football devoted loved ones if nicely framed. Truly a unique gift! All autographs are personally collected by myself and are guaranteed genuine (unless stated). Sales by third parties are not guaranteed genuine. I also have a large selection of autographed Oldham Athletic team photos and individual photos which are not for sale. They are proudly displayed as collages in frames but everything has a price! Oldham fans should e-mail me with specific requests and if the price is high enough I would consider doing a deal.

All autograph total numbers quoted on team sheets are approximate, a few may be duplicates of the same autograph. Should you require any specific autographs please e-mail a request with the name of your required player. Where ‘reverse’ is stated these are back to back autographs and will be sold first come first served.

Some autographs are undecipherable so please give clues to help with individual autograph requests. Aplogies are offered for mis-spelled names or wrong names. Corrections to spellings would be appreciated but remember I am an Oldham fan after all.

I also have a collection of Football League reviews (1970’s) which are for sale at Ł1.50 per copy including postage (worldwide). These contain team photos, ground photos and articles which make interesting reading. Tell me which team you are interested in and I will find you relevant copies.

Also on offer are action shots, team and individual photos (all unautographed) of various teams from the early 1960's. Please enquire if interested. Reasonable offers should be e-mailed to the address at the bottom.

All photograph sizes are given in millimetres (W x H). Some photographs are newspaper photographs.

If you have anything football related to sell or exchange, send details and your add will be included